Over the past 5 or 6 years, FCSC has seen a surge in women joining the club! We are committed to fostering a community of shooters that welcomes and supports women in whatever aspect of the shooting sports they are interested in. To that end, we have developed a program of peer pistol mentoring, which provides regular opportunities for novice pistol shooters, many of whom are women, to connect with and shoot with volunteer fellow members who are experienced shooters. We also schedule women's informal pistol shooting sessions to provide an opportunity for women members to meet and enjoy shooting together.

For women shooters, experienced or novice, or for women thinking about getting their first gun, here is an interesting website with a lot of great information:

LAS VEGAS, Nev. - More than half of women (55.6 percent) participating in a new study commissioned by the National Shooting Sports Foundation said they intend to purchase at least one firearm in the next 12 months. That finding and many others reflect the growing popularity of firearms ownership by women, who represent the fastest growing segment of the shooting sports.

Today during the Shooting, Hunting and Outdoor Trade Show (SHOT Show), NSSF President and CEO Steve Sanetti discussed the findings in the new report, "Women Gun Owners: Purchasing, Perceptions and Participation." NSSF, which owns the SHOT Show, is the trade association for the firearms, ammunition, hunting and shooting sports industry.

"In the past decade, the number of women owning firearms and participating in target shooting and hunting has soared. This study helps us understand why women are choosing to purchase firearms and accessories and what shooting activities appeal to them most," said Sanetti. 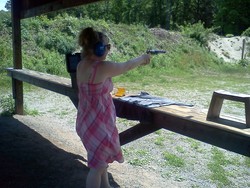 The study, conducted in 2014, focused on women ages 18 to 65 who owned at least one firearm. Over a third of women in the study were new gun owners, having purchased their first firearm within the last three years. This group of new gun owners, who are primarily between the ages of 18 and 34, reflects the changing demographics among women choosing to own firearms-a change captured visually in NSSF's new infographic, "Girl Power," which complements the new report.

"The women's market is a force in our industry, and manufacturers, retailers and shooting ranges are making changes to their products and services to satisfy women's tastes and needs. This report will assist anyone interested in knowing more about women's enthusiasm for and attitudes toward firearms," said Jim Curcuruto, NSSF Director of Industry Research and Analysis.

Among the report's findings:

Placing a premium on safety, women say the single most important reason why they decided to purchase or own a firearm is protection-both personal and home protection. Learning to hunt and going shooting with friends and family were also cited. 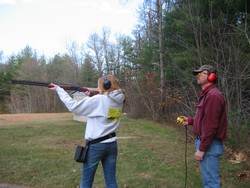 The report shows women are attracted to shooting activities such as practical pistol, clay target shooting, long-range shooting and plinking; they were not as active, however, in gun collecting or 3-gun and cowboy action shooting.

Growth of the women's market is quite visible among firearms retailers. In NSSF's Annual Retailer Survey, more than 74 percent of retailers reported an increase in women customers in their stores in 2013 over 2012.

NSSF's "Women Gun Owners" report is available to NSSF members and to media by request. 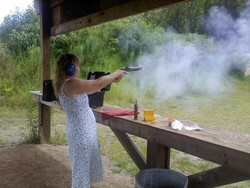 If you are interested in becoming a member, please visit the Become a Member page, which describes the application process.

Click on the link below to go to the Mass.gov page for information about getting a firearm license in Massachusetts (Mass.gov is the official website of the Commowealth of Massachusetts): 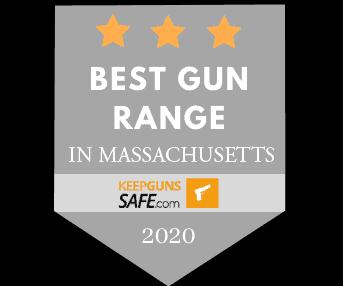 KeepGunsSafe.com - FCSC One of the Top Gun Ranges in Massachusetts

James Forrester of KeepGunsSafe.com has noted that Franklin County Sportsmen’s Club is one of the top gun ranges in Massachusetts!
Posted: Mon, Sep 28, 2020

Test your skills and compete with others on the rifle range!
Posted: Wed, Mar 04, 2020

In June we relocated our Archery Range to a woodland setting a little more removed from the gun ranges.
Posted: Sat, Jul 06, 2019

Last Sundays of the month through November. For Members Only. Calibers .17 through .223 Centerfire. $5 Entry Fee. Rifle Range Reserved.
Posted: Mon, May 14, 2018